Written by Kevin Dunne.
Call him Robert Zimmerman or call him Bob Dylan, the folk singer has nearly seen (and sung) it all. Heartache, injustice, tragedy, war, love, innocence, friendship, more heartache, and life are but a few topics of the singer’s 450-plus songs and ballads. At the age of 71, Dylan has been on the Never-Ending Tour for decades, worked with world-famous musicians, received numerous awards and commendations (including one from the Pope), acted in several movies (and have had many more made about him), and as of September 11th will have released his 35th studio album.

Tempest is his first new album since 2009’s Christmas In the Heart and Together Through Life. Many fans were disappointed by these two albums, claiming a lack of sincerity and that Dylan’s voice was too rough. While a few of these claims may have been over exaggerated, Dylan’s voice on Tempest is much less raspy and gravely, something best left to Tom Waits. With that said, the entire album is one of the most solid works he’s put out in years, and with albums like Modern Times, that says a lot. 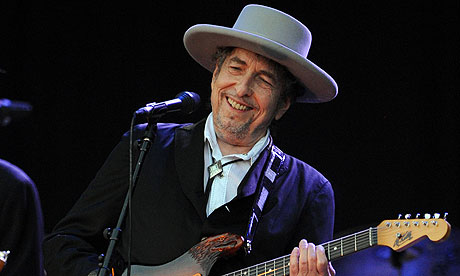 One of my favorite things about Tempest is the return of Dylan’s ballads. Several songs on the album break the seven minute mark, as Dylan does what any good folk singer does and tells a story. On each of the ten songs, a vivid mental image is painted by Dylan’s expert songwriting and soothing folk-blues-country sound. The album really is moving and had me smiling from the uplifting opening track, “Duquesne Whistle“, to the slower and slightly mournful “Roll On John”. Dylan really pours his heart and soul into each track, making each one truly unique.

The beauty of Bob Dylan is that his songs carry a great weight of personal meaning, and not just to the singer; all of his songs have a greater poetic meaning to the individual listener. Tempest delivers that meaning, not just with a bang, but with a heavenly explosion of heart-felt lyrics. It is for that reason that I love this album so much and why, in my opinion, it’s the frontrunner for Album of the Year.
Everybody should go out and pick up this album. Buy it on CD, buy it on iTunes or Amazon, or buy it on vinyl, so long as you buy it. I’m not just saying this because Dylan is my favorite musician or because he wrote songs like “Desolation Row”, “Visions of Johanna”, or “Shelter From the Storm”. No, Bob Dylan is a part of the American experience and has influenced more than just music in his lifetime and it is for that reason that you should listen to Tempest at least once.